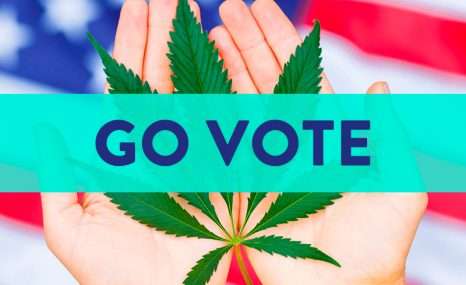 It’s election day, and across the US, cannabis is on the ballot. At present, there are 37 US states and 4 US territories that have legalized and/or decriminalized medical, hybrid, and/or adult-use cannabis. While it may take a few days for all the results to be tallied and announced, there are sure to be some big changes in store for the future of the US cannabis industry.

Here’s an overview of what 2022 cannabis initiatives are on the ballot in which states, and how those changes might affect your state’s cannabis laws.

Arkansas will be voting on Issue 4, an initiative to legalize cannabis in the state. Expected to pass, the margin may be slim due to a last-minute push by conservative groups to defeat the initiative. If approved, AR Issue 4 would:

Missouri will be voting on Amendment 3, a highly-contested measure to legalize cannabis in the state. If approved, MO Amendment 3 would:

South Dakota will be voting on Measure 27 Marijuana Legalization Initiative Ballot Question, an initiative that was passed in 2020, before being ultimately overturned by SD courts.Support for the initiative is lagging, but proponents remain optimistic.. If approved, SD Measure 27 would:

Colorado might make history again, voting on Prop 122 Decriminalization and Regulated Access Program for Certain Psychedelic Plants and Fungi Initiative Ballot Question. This initiative aims to legalize use of psychedelics in the state, following Oregon’s lead in authorizing licensed facilities to administer supervised psilocybin services. If approved, CO Prop 122 would:

Ohio will be voting on cannabis decriminalization initiatives in 6 cities: Corning, Hemlock, Kent, Laurelville, Rushville and Shawnee. If approved, these OH local initiatives would:

Texas will be voting on cannabis decriminalization measures in 6 cities: Denton, Elgin, Harker Heights, Killeen, and San Marcos. If approved, these TX local measures would:

Wisconsin will be voting in three counties and five municipalities across the state to gauge voter support for statewide cannabis decriminalization, taxation, regulation, and criminal reform.
If approved, these measures will not change any current laws, but they will: